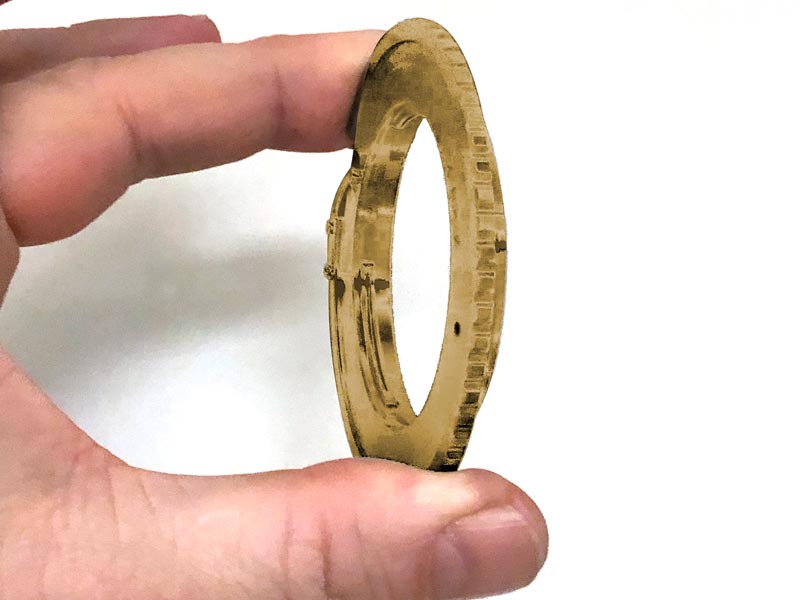 “One Ring to rule them all,
One Ring to find them,
One Ring to bring them all
and in the darkness bind them.” – J.R.R. Tolkien, The Fellowship of the ring

This poem – originally an inscription on the inside of the ring known by many names – spontaneously came to mind today when I was inspecting a very special sort of ring that arrived in the mail today.

Long-winded background story, which you might find interesting. Otherwise: skip.
I had my first attempts with adapting legacy lenses to digital in the age when the Canon 5D was still a new camera, and even then, I came to two key conclusions.

First, that flange focal distance is crucial. If you are adapting a lens that was made with a longer flange focal distance to a system that has a shorter flange focal distance, you were good to go, whereas if you adapted a lens designed for a shorter flange focal distance to a system having a longer flange focal distance, it was like opening a pandora’s box: First, you had to get adapters with corrective optics to be able to reach anywhere near infinity focus and those adapters were not exactly cheap. Secondly, once you mount such an adapter in between your lens and body (in my case it was some fancy FD glass and the Canon 5D), the adapter acts like a mild teleconverter, so your wide angle is not that wide. Third, you shoot away happily all day, then come home, plug your CF card into the computer, only to be disappointed with the results. Why? Because the image-degrading effect of the adapter optics can be quite marked. Obviously, this can partially be addressed by getting a higher quality adapter with better optics, but if you’re like me, you might by then have lost the taste for the experiment. So I left my FD glass on my A-1 and shot away happily with my m42 lenses on the 5D.

Well, not quite. Because the second conclusion was that adapting legacy lenses and a dSLR are actually not such a good fit. Why? In one word: metering.
Sure, if you only shoot wide open in aperture priority mode, it’s not so great a hassle, and if you do manual exposure, using a legacy lens does little to change the workload, but as soon as you want to start stopping down, you’ll need to play with your A/M switch or your aperture mechanism engage switch, and it all increases your workload, and – more importantly in my case – dramatically lessens your keeper rate.

Enter mirrorless cameras, and suddenly adapting becomes (comparatively) child-play. Not only do You suddenly have flange focal distances at your disposal that allow the adapting of basically anything (well, some x-ray lenses and other industrial stuff is still troublesome), but you also have functional on-sensor metering (not that kludge that many same era dSLR live view’s were), and on top of that you get real-time, functional manual focusing aids! Heaven, especially once the first affordable full-frame mirrorless cameras hit the market. Middle earth has finally reached the fourth age.

Alike many, as soon as I could justify buying a Sony ⍺7 (an ⍺7R in my case) as purely a hobby camera, to play with legacy lenses, I took the plunge. In the following years, I’ve upgraded the ⍺7R into an ⍺7R2, bought loads of adapters and too many legacy lenses to count.

On the whole, it’s been a satisfying relationship, and I think that if adapting legacy lenses is the only criterion and you want to avoid a crop factor, then the Sony ⍺7-2 (vanilla or R) offers tremendous bang for the buck.

But there have been issues. Even after many years of living with it, I have not come to grips with the Sony menu system, and living in an environment where you use gloves almost half the year, Sony’s controls are quite dismal. So I’ve been well aware that I’d fall for the Nikon Z lure at some stage. Thanks to a minor windfall coinciding with a Nikon promotional campaign…

It’s too early to say anything final about whether it’s all I hoped it to be, because I have not yet gotten to play with adapted lenses. Why? Because I made a list of all the adapters I’d sooner or later want to get for the Nikon Z. I noticed that some are not yet available, and the rest would cost me more than I can justify. Especially because there was one other avenue to explore first:

One ring to rule them all:

This, dear readers, is the one ring to rule them all. It’s a NEX to Nikon Z adapter, which cost me less than any average K&F dumb adapter. With this one adapter ring, I can use all my Whatever–NEX adapters (assuming they’re not smart adapters) on the Nikon Z camera. It is the perfect solution for any legacy lens user thinking of transitioning to Nikon Z from Sony E/FE, because it effectively removes the need to invest in renewing a whole range of adapters.

It seems Nikon listened to at least some of the complaints regarding the long FFD of the Nikon F mount, or then it’s just Karma.