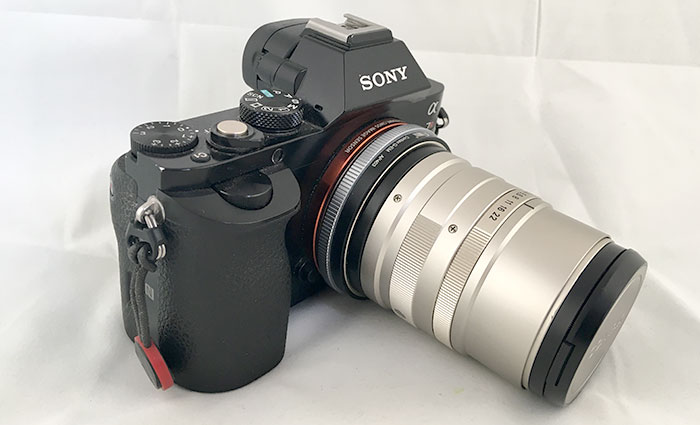 My good friend Kari was helpful enough to lend me one of his Contax G lenses (the Carl Zeiss Sonnar 90 mm f/2.8) and a manual adapter for mounting the lens on my Sony a7.

Contax G lenses have a fearsome reputation, and while part of that reputation is derived from a combination of the names ‘Zeiss’ and ‘Contax’ as well as from their rather exclusive price (both as new and today), I have to say – based on this short test, that the reputation is deserved. But I also have my reservations…

Make no mistake, this is not a review (I did not have enough time for that), more of a quick comment…

Yes, the lens does look nice, especially if you like the Champagne/titanium colouring. And if you keep the lens cap on, you can walk around with the magical Contax-logo showing. Admittedly, the lens in question (Sonnar 90 mm) does extend quite a bit beyond the body, but the shorter focal length Contax G lenses make for a very nice- and balanced-looking package with a camera like the Sony a7.

But outward appearance is not all you expect from a lens carrying both the names “Zeiss” and “Contax”. You also expect it to perform. In order to conduct a quick test, I set up my tripod and dug out five other lenses of similar focal lengths and took a range of test shorts (landscape, MFD, portrait).

As the 85-90 mm focal length is the archetypal portrait lens the most sensible comparison would utilise headshots. Sadly, that day I did not have a live model handy, so instead I set up a test based on a relatively close target (the leaves and blossom buds) at 1,5 meters, with a stone wall in the medium background (4 meters).

There are a lot of detailed inferences, which can be drawn from these pictures, but the most important points are, that the Contax G lens has stellar detail wide open, and that f/2.8 is more than enough to allow significant subject separation.

Another key take-away is that the differences are quite small, and any performance advantage a more expensive lens (e.g. Planar 85/1.4) might have, can be more than undone by a minor mishap (in this case, a light breeze).

In summary, the Zeiss 90 mm f/2.8 for Contax G performs very decently across the board. In all the test shots, the Sonnar 90 performs almost identically to its older cousin (the Sonnar 85 for C/Y), while consistently showing better handling of backlit situations than the older lenses in the test (Canon FL and Hexanon).

In general (non-test) use, the lens showed its quality (whenever I was able to nail focus): an almost sublime combination of definition and blur. And those colors …

At 240 grams, the Sonnar 90 is both a relatively light short tele lens, and (as you could see on the picture) very svelte. On the other hand, it is a bit longer that its older cousin (in C/Y mount), and actually a bit heavier too, but the overall impression of a very small and light portrait lens holds true.

Workmanship and build quality are nothing short of stellar. The lens construction feels solid, without needing to be built like a tank. The aperture ring has very solid, and satisfying clicks (only full stops), without needing force. All in all: very impressive.

Compared to all those SLR lenses of different era’s, Contax G lenses are a bit different. Not only are they rangefinder lenses (which typically are smaller and thinner), but they are autofocus rangefinder lenses. While I have never used them in their original milieu (a Contax G/G2 camera), I assume the usability and handling of these lenses in their intended environment was nothing short of fantastic (even though I’ve heard some gripes about the mounting/unmounting of these lenses on the Contax G cameras).

Using them adapted on a modern mILC is not an entirely trouble-free experience. Firstly, I do understand the gripes about mounting: The mount is somewhat finicky, and the lens needs to be perfectly aligned with the adapter, before twisting the locking ring (the Contax G mount is technically a breech-lock mount, although it does have a great many characteristics of a bayonet mount). Likewise, when unmounting the lens I kept feeling terrified that I’d drop it, as I was always only gripping the lens by the locking ring. (My recommendation is: use a neck strap to hold the camera, and use two hands on the lens – one to hold the lens and another to twist the locking ring.)

But (in my opinion) the absolutely biggest drawback comes from that Contax G lenses have no native affordances to facilitate manual focus. Instead, to enable focusing, the adapter has to be able to drive the slot-drive screw. For this, there are basically two types of Contax G adapters: Fully manual adapters and auto-focus adapters.

As initially noted, my experience is based on using a specific type of manual adapter, and I can not recommend this very adapter: The ring used to drive the slot-drive focusing mechanism was both stiff (which a teardown and re-greasing helped alleviate somewhat), narrow, and slippery. Moreover, the ring used to drive focus is situated very close to the camera body, thus making it somewhat hard to reach. In short, the usability of this setup left a lot to be desired.

So that you would not be left with the wrong impression, I do not think that Contax G lenses adapted on mILC’s necessarily suffer usability issues. While I have never tried a Contax G autofocus adapter, those first-hand accounts I have heard describe the setup to function decently. Also, I’ve seen manual Contax G adapters which offer a decently broad and grippy focusing ring.

Caveat: As usual, these opinions are my own, and are specific to full-frame.

With the valuation of C/Y Zeiss lenses continuing to climb, Contax G is an increasingly interesting approach to getting your hands on Zeiss glass (if that’s your intent). Furthermore, compared to their older cousins in C/Y guise, Contax G lenses have several advantages: They are newer, have more advanced coatings, are rangefinder lenses and can use optical designs not available on SLR lenses (Biogon, anyone?), while often also being lighter and smaller and can be used as autofocus lenses (with the right adapter).

On the other hand, the ultimate usability of Contax G lenses is very dependent on the adapter, and some of the most interesting lenses in the Contax G -lineup may be those which work least well with full-frame mILC’s (especially those with thick sensor stacks, see link)

I am very pleased to have had the chance to make the Contax G acquaintance, and if someone lends me the camera and a moderate wide-angle lens one day, I’m sure I’ll destroy some rolls of film, but I will not be going on a Contax G shopping spree.

While the advent of mILC’s and suitable adapters have been a godsend to all those who have some Contax G lenses lying around, for my tastes, Contax G lenses are a bit too new, too high-tech. I know I’m a bit of a luddite, but I want three things from a lens: Interesting rendering, an aperture ring and a focusing ring. For me, I’d rather use the older cousin in C/Y mount. Or if I really have to make sure my lens does the job, I’ll take the 85 Planar. That said, If anyone wants to lend me a 35 Planar, I will not decline.

I spent the best part of a week walking around with this lens, and while (as I hope I’ve been able to convey above) I was impressed on many levels, I did not feel sad to have to return it.

Many thanks to Kari for the loan.