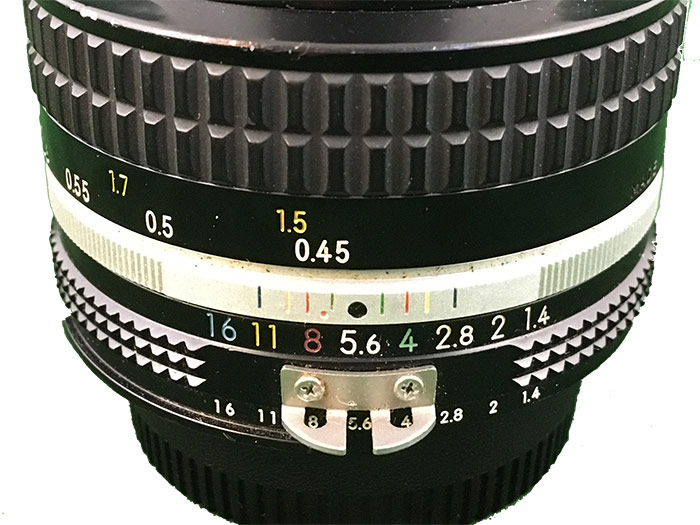 This post will be relevant only to those readers who use Nikkor lenses on Nikon SLR’s and dSLR’s, but may be of academic interest to others as well.

The central point is – if you’re using a Nikon dSLR’s and use Nikkor lenses that have an aperture ring – that there’s a chance that you can still set your lens aperture on the lens, and not only by using the control wheel on your camera body. This might be worth a post, as this is a feature, many of the more recent entrants into photography will not know is available.

First, we’re going to have a look at history to understand why this feature exists, then look at those combinations of lenses and body which support this, before finally discussing whether (or more precisely: under which conditions) controlling the lens aperture on the lens is desirable.

If you feel you could read up on the Nikon F mount in its entirety, have a look at this article.

History – how come there is such a feature?

Then came metering (which meant that the camera could actually meter the amount of light available) and needed some information to estimate whether the shot would be exposed properly. As the camera knew the shutter speed (the photographer had set it), it now also needed to figure out the film sensitivity and the aperture. The first was accomplished through adding a dial the photographer would set in accordance with his film’s sensitivity, but aperture was trickier as lenses needed to have a way to communicate the selected aperture. Nikon’s first response to this were the “rabbit ears”.

Jump one generation forwards, and Nikon replaced the cumbersome rabbit ears in favour of aperture indexing (AI) in 1977. AI lenses have a “notch” or “ridge” next to the mount and interacting with (compatible) camera bodies, that automatically communicates the set aperture to the body (which has a lug or “lens speed indexing post” to read the aperture). Thus bodies could now tell you whether you needed more light (increase aperture or lengthen shutter speed) or less. This trait carried over to AI-s lenses, and subsequently all the way until G-lenses were introduced (starting in 2000).

Because Nikon has always been unusually (read: more than it’s competitors) keen to enable cross-generation compatibility, the aperture ring remained on cameras even in the AF age (when bodies were fitted with control wheels which could command the lens aperture). While Nikon has not introduced a new lens sporting an aperture ring since 2001 (even though some are still being manufactured today), they still allow users the preference to (with some combinations) to do it “the old way”.

Ability – will your combination of body and lenses allow this?

While photographers nowadays mostly set the intended aperture using a command dial on the camera body, using the aperture ring is still possible on some combinations of Nikon dSLR bodies and lenses. This is a not so often discussed feature and I’ve been unable to make a comprehensive list of body-lens combinations which support this. Below you will find a list of all successfully tested combinations, but before that, we can analyze.

To be analytical about it, for a you to be able to control your lens aperture using your aperture ring, you need three things: A lens which communicates its aperture mechanically, a body which can read that, and finally, the camera software also has to support using the aperture ring. Let’s take this in steps:

Up until about 2000, all Nikon lenses had an aperture ring and all AI/AI-s/Series E/AF/AF-D as well as the earliest AF-S lenses (up till the advent of G lenses) had that notch in the lens base, enabling the lens to communicate the position of the aperture ring. Simply put, all the following Nikon lenses have this ability:

Likewise all third-party lenses which are Nikon AI compatible, will allow this.

2) A Body which can read lens aperture setting.

Film SLRs
With the advent of AI, Nikon naturally added this feature to its cameras, starting with the Nikkormat FT3, Nikon EL2 and Nikon FM. All Nikon Film SLR’s introduced after 1977 can read the AI-compatible lens’ selected aperture. All the way to the Nikon F6 still being produced today (2020).

Digital SLRs
Nikon’s first digital SLR was the Nikon D1 (introduced 1999), before the advent of G-lenses, so naturally it included the requisite parts for reading a lens aperture setting mechanically. Thereafter, with the increasing proliferation of AF-S and G -type lenses, the need for the mechanic reading of aperture (and screw drive autofocus) has significantly lessened.

The following list is based on the assumption that all bodies which are compatible with AI-lenses, are also able to mechanically read a which aperture a lens is set to:

By default, cameras will give an aperture error (EE) when an AF/AF-D, or AF-S (non-G) lens is mounted and its aperture is not set to its minimum value. To allow setting the aperture using the aperture ring, the user needs to modify their cameras settings:

Note, that even though you set your body to allow the aperture ring to control the aperture when possible, G-type lenses (those which lack an aperture ring) will remain controllable using the designated command wheel.

Surety is better than speculation …?

Instead of assuming that a camera which has the mechanical parts to allow aperture control through the lens aperture ring, I’d rather have it proven.

While I have not been able to find a conclusive list online, I know (out of personal experience) that the following bodies have both the requisite mechanics and software: D200, D300, D700, D800 and Df.

If you want to add your piece of information, drop me a line (comments).

Yes, but why use the aperture ring?

Assume your body and lens allow using the aperture ring, why would you want to do that?

Pro’s to using the aperture ring:

Con’s to using the aperture ring:

In any case, if your camera and lens combination allows it, you might want to try it out. Maybe it’s not your cup of tea, but maybe it is…

Common wisdom has it that G-type lenses are basically synonymous with AF-S lenses, but technically that is not true. Firstly, the first G-type lenses appeared before AF-S lenses did. Secondly, many early AF-S lenses (especially pro-level zooms) still had an aperture ring. Look for more in the article on the Nikon F-mount.