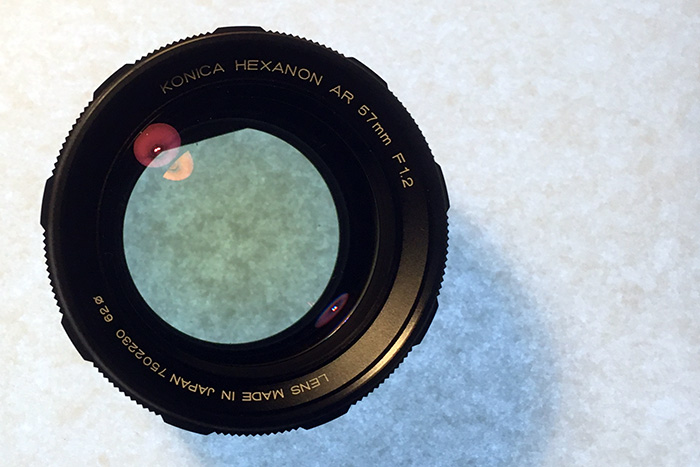 Pictured: Old style (chrome ring) Konica Hexanon AR 57 mm f/1.2 with obvious yellowing. This is one lens (of many lenses) known to be radioactive.

If you’ve been around discussions regarding legacy optics, you will have stumbled upon the fact that there are lenses which are measurably radioactive. Moreover, there’s been a lot written about it over the years, but still there are immense amounts of misconceptions about radioactive lenses both in the blogosphere and (more frequently) in ‘social’ media.

I’m now writing this short post partially as I’m just finishing up a major comparison of 9 moderate wide-angle lenses (one of which is radioactive), and partially because I think it would not hurt to once more repeat the facts (and not the fantasy).

I. Why are some lenses radioactive?

The short answer is: because minerals have been used in the manufacturing of the optical glass, that decay and emit ionizing radiation (i.e. are radioactive). The reason for adding such materials in the glass mixture is to tweak the optical properties of the glass (higher refractive index with low dispersion), in order to produce better lenses.

Most typically, the radioactive material used in manufacturing lens optics is thorium oxide (ThO2), because thoriated glass has very similar optical properties as fluorite CaF2 crystals, but without being as delicate.

II. Are these radioactive lenses dangerous?

While radioactive radiation is nothing to be blasé about, owning and using radioactive lenses will not increase your exposure to radiation in a significant way. Don’t take my word for it. Instead read this study, which clearly shows that even constant use of a radioactive lens comes nowhere near the exposure limits considered safe[1]. Just don’t ingest the lens.

III. So why are these lenses no longer being manufactured?

While the use of radioactive lenses is safe, their manufacture is not. As the forming of lens elements relies on abrasion (grinding, polishing) this means that the manufacture of such lens elements produces massive amounts of radioactive particles, which – when inhaled or ingested – would be sure to wreak havoc to one’s lungs and intestines (or necessitate massive and costly precautions to make sure inhalation and ingestion are avoided).

In essence, thoriated glass is very much like asbestos: banned because while it is not dangerous in its installed form, working with it is liable to show up as a cancer cluster

IV. Are there other downsides to radioactive lenses?

Yes, there are. While the thoriated glass itself has fantastic optical properties, the radiation has the ability to lead to the discolouration of lens elements (typically in the yellow-orange-brown -end of the spectrum), leading to that such lenses:
a) show a significant colour cast
b) do not transmit as much light as they used to (transmission or t-stop is lowered), leading to longer shutter speeds.

Some contend that a yellowed lens is perfect for B&W photography, because such a lens basically has a built-in yellow filter, but I have not been able to personally find support for this contention.

According to many sources, this discolouration can be successfully treated by exposing the lens elements to light (especially UV-light) for prolonged periods. I have not (yet) tried this myself, but the method is well documented (see links). Please note that you are not treating the radioactivity (that remains), you are only addressing one of its side-effects.

V. How do I know if one of my lenses is radioactive?

In short, only by testing it with a decent geiger counter. There are smartphone dongles and apps which purport to turn your smartphone into a radiation meter, but I’d take these with a bag of salt (the biggest issue with most of these contraptions is that they detect only gamma and x-rays and are unable to detect alpha and beta-radiation).

Alternatively, there are some public lists of radioactive lenses, and you can have a look at those, but these lists are neither complete (nor are they entirely accurate)

Finally, while a clearly yellowed or browned lens might be a good indicator of radioactivity, the converse is not true, as a radioactive lens might recently have been treated to address the discolouration.

I’ll just mention a couple of counterfactuals, so you do not think they might be true (and I just happened not to mention them).

“The entire lens is radioactive.” Wrong. typically we’re talking about one or two lens elements.

“The coatings are radioactive.” Wrong. It’s the lens glass (of a lens element or two) itself.

“All radioactive lenses are about equally radioactive.” Wrong. Radioactivity is dependent on the amount of radiative material, which basically means that the bigger the lens element or the higher its share of ThO2, the more it radiates. Further, depending on whether the radioactive lens element is buried within the lens or the front/rear element, its effective radiation (radiation outside the lens) varies greatly.

“Radioactive lenses should be stored is special cabinets/boxes.” Wrong, mostly. Thorium decay itself is a very slow-burning process (the half-life of thorium is measured in billions of years) and is only an alpha-particle emitter. Alpha-particles are unable to penetrate even the human skin.
On the other hand, the results of thorium decay themselves are liable to decay further and emit beta and gamma -radiation (but due to the slowness of thorium decay, these materials are present only in utterly minuscule amounts). Beta-radiation is able to penetrate the human skin, but is stopped even by a simple layer of plastic or metal, so any aluminum case will do. Gamma-radiation is practically unstoppable (few of us can store lenses behind 2 meters of concrete). Read more here. So while even a simple case is sufficient protection against alpha and beta rays, protecting against gamma-rays is simply impractical.

“Yellowing happens as the radiation effects coatings/canada balsam.” Wrong again. What actually happens is that the radiation is absorbed by the surrounding glass, and in so doing an F-center is created. While a single F-center is utterly indistinguishable, as their numbers increase, the transmissive ability of the glass is weakened.

Footnotes
[1] Obviously, that a radioactive lens does not pose a direct threat to your health does not mean that it’s not potentially dangerous. For instance I would think twice about opening such a lens for repair (in normal circumstances much of the radiation from the thoriated lens element is absorbed by the lens housing), and would make sure to store them in places where they are not in constant contact with people. Lastly (should that ever become relevant) I would make sure to dispose of such a lens as (mildly) radioactive waste.