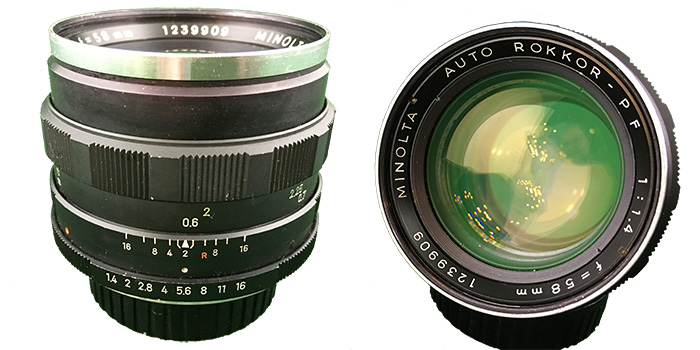 The fast fifty – a prime lens with a focal length between 50 and 58 mm and a maximum aperture of f/1.4 – is the lens that has been the workhorse of many an affluent hobbyist, enthusiast and professional photographer for decades. Even today many lens manufacturers have a fast fifty in their lens lineup, but neither Nikon nor Canon have introduced a fast fifty in their new mirrorless line-ups, and in Sony’s mirrorless lineup the 50/1.4 position is held by a Zeiss/Sony lens. Hence, the fast fifty is by no means as ubiquitous as it used to be. A question worth asking is, whether the fast fifty is still a relevant lens class:

Today you can crank up your camera’s ISO easily, and do so far past those kinds of sensitivities which only 40 years ago would have been pure science fiction. Also, given that the fast fifties are usually heavier, more expensive and often show more distortion than nifty fifties, one has to ask: Does the fast fifty still defend its position as a relatively affordable wide-aperture lens? And, more importantly, do you need to have one (or more)? There is no simple answer.

Yes, even today you might want a fast fifty lens simply to brag or to elevate yourself above the nifty fifty crowd. Yes, you might still be able to make actual use of the added brightness of such a lens, especially if you shoot film. But I venture that the central rationale for why fast fifties still fetch a price premium over nifty fifties of similar pedigree is in the current fixation on out-of-focus backgrounds and extreme bokeh.

Ceteris paribus (other things remaining equal), an f/1.4 lens promises to halve the shallowest depth-of-field of an f/1.8 lens, thus also (when optimising the lens for subject separation) offering a significantly stronger degree of subject separation.

That said, the shallowness of a depth-of-field and the corresponding amount of out-of-focus blur is not everything, especially if the lens aims to be able to be more than a one-trick pony. Instead, if you hold to the ideal that a fast fifty should be able to do all that stuff you might carry a nifty fifty around for, a fast fifty will need to be about as versatile as a Swiss army knife.

For those who like to match modern cameras with legacy lenses, legacy fast fifties remain an interesting proposition. The fast fifty remains the one legacy-age lens that could combine a wide aperture with being affordable and reasonably versatile. Many of these lenses epitomised the best their manufacturers could offer. While fast fifties are nowhere near as numerous in the nthhand market as nifty fifties or dubious 3rd party zooms, neither are they hard to come by, further increasing their appeal.

JAPB has recently published its first comparison of legacy fast fifties, and while some lenses were unsurprisingly good, others were surprisingly decent, one was refreshingly different, and one contender managed to produce a real surprise. Read more here.